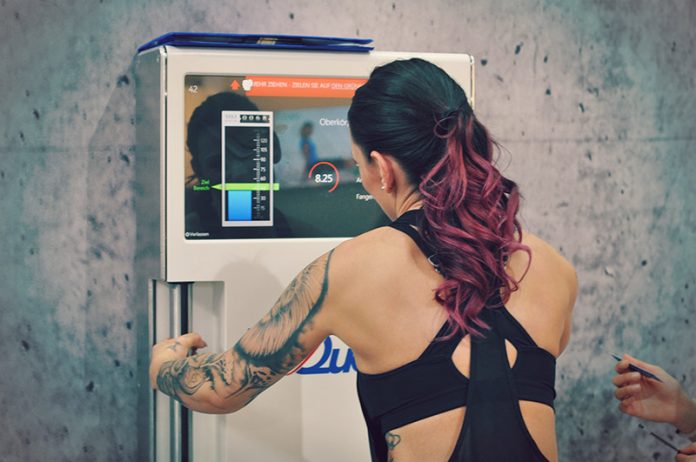 The UK Chief Medical Officers’ Guidelines 2011, ‘Start Active, Stay Active’ highlights the importance of ‘Physical benefits for adults and older adults.’ Included in the ‘What should you do?’ items are Be Active, Sit Less, Build Strength, Improve Balance. In order to be able to evidence improvements, scientifically validated measurements are the backbone for outcome management programmes. MIE FitQuest is designed to provide the measurement data of these different aspects of fitness.

With this in mind, the MIE FitQuest UBS model is designed to cater for a wider demographic of adults. Older and deconditioned adults who may not be able to complete press ups from the floor position, are now able to complete a scientifically robust measure of upper body strength and endurance by incorporating a dynamometer function into the handles of the FitQuest UBS model.

The handles are designed so that the user is able to apply direct forces so as to measure the trapezius muscles or the pectoral muscles. The measurement protocol is based on the well establish principles used in the MIE Digital Analyser which has been widely adopted in the medico-scientific research community.

The peak force is measured twice, as it is well reported that many subjects provide a better peak force on the second test due to numerous human factors.

The UBS handles have been designed to measure the applied force irrespective of hand placement. That has allowed the handles to be longer than normally required, so as to accommodate subjects of different heights. This therefore provides for a greater degree of conformability to the test protocol described in the test procedure. Real-time biofeedback helps to ensure that the subject is able to apply maximum force and allows them to compare the second test to the first.

Endurance is measured by asking the subject to maintain 80% of their peak force for as long as possible. Our measure of endurance is expressed as the area under the force/time curve throughout the test period and is measured in Newton Seconds. This measure takes into consideration any changes in maximum peak force as the subject improves over time. (i.e.as their peak force increases, we measure 80% of their new peak force, thus maintaining a short test time, yet measuring their true fatigue values).

To help maintain repeatability of the measurements, the MIE FitQuest has been designed to encourage the user to maintain a fixed test protocol such as limb position, record the best of two tests and provide real-time biofeedback.

To find out more about the UBS and the new test protocol, come and visit us on stand 285 at Elevate on the 10th and 11th of May.