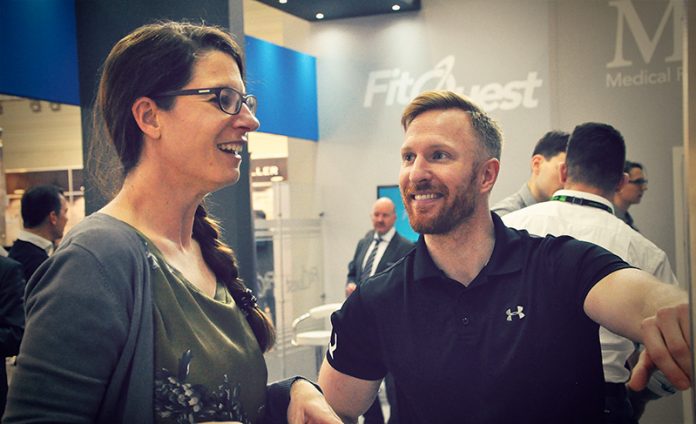 Sophia Bergner, a Master’s student in Prevention and Health Management at the University of Saarland in Saarbrücken, Germany, has recently conducted a study examining the influence of online coaching on body weight, body fat, abdominal girth and physical performance for members at our partner facility, Quest Vitality in Kolbermoor, Germany. As a part of the study, members followed a 6-week programme incorporating a range of support methods including face to face support and online coaching.

52 participants were divided into 3 groups; a control group consisting of 17 people, who continued their normal workout routine independently but were measured at baseline and after 6 weeks; a test group consisting of 19 people, receiving nutrition and personal training support face to face once a week; and a test plus online group consisting of 16 people, who received nutrition and personal training support face to face and also access to an online coaching tool which consisted of recurring emails on training updates, motivational messaging and phone calls from their personal trainer. Every participant, irrespective of the group they´re part of, had access to the gym 7 days a week during the 6 week project.

As part of the programme, all participants received information linked to performance diagnostics and coaching support broken down into three phases. Phase one involved a group session discussing triggers, expectations, tasks and making a commitment to their training. Phase two utilised the GROW (goal, reality, obstructions/options, way forward) strategy which included a focus on SMART goal setting, situation analysis, options and obstructions, and advice on what type of training to participate in, when to train and who to train with. Phase three was the final part of the programme to support the participants in continuing to train independently upon completion of the programme.

As part of the pre- and post-programme assessments, FitQuest was used to assess the physical performance of each participant. FitQuest was chosen due to the validity and reliability of the tests and the ability for an individual to test themselves independently from their coach.

Participants in each group attended Quest Vitality at least twice a week to complete their prescribed programme and following the 6-week programme, all participants in all groups demonstrated an improvement in their physical performance scores. This improvement was statistically significant in both test groups (online and face to face, and face to face only), but not for the control group although an improvement was achieved. No significant change in weight loss was obtained across the 6 weeks, however participants did achieve statistically significant changes in body fat, abdominal girth and FQ score.

The study concluded that online coaching played a part in supporting members in staying motivated to complete their training and that MIE FitQuest provides an opportunity to complement medical fitness research examining physical performance improvements. It provides far more than only body composition measures enabling researchers and participants to see their physical improvements after concluding their programmes. The researchers felt FitQuest was a helpful instrument to use in all of the coaching phases to measure, update progress and continue to coach and motivate the participants once they have completed their training programme with their trainer.

The following video provides some more insight from Marcel Andrä, a trainer at Quest Vitality, about his experience of using FitQuest for his own training and for his clients.

Following the success of this research, Quest Vitality have continued to deliver online and in person support to their members and utilise FitQuest for initial member assessments and reassessments. The members taking part in the study, and in additional programmes since the study’s completion, found FitQuest easy to use independently and with their trainer, and enjoyed the immediacy of their results and that it enabled their trainer to provide specific advice linked to their strengths and weaknesses to tailor their exercise programme.

Contact us to find out more about how FitQuest can help you support your members to achieve their goals as a part of their member journey.