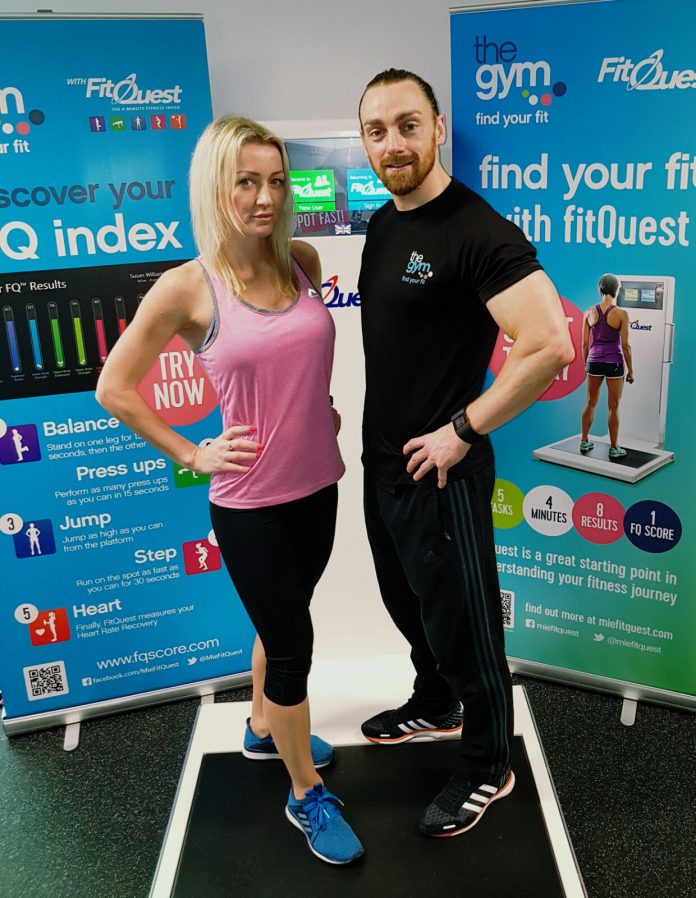 Kelly Haynes has been a member of The Gym, Birmingham for 5 years. Kelly joined the gym as her focus was on improving her fitness and staying healthy. As a part of her member journey she has connected with Dean Hough, a personal trainer at the club to support her throughout her training and to help her stay on track as she found she was plateauing working out on her own. She became a client of Dean’s two years ago and as a part of her programme, measuring results and assessing her fitness has played a significant role.

Use of FitQuest has resulted in Dean and Kelly changing her training programme so that Kelly has clear targets and can track significant improvements in her weakest areas. Kelly has found using FitQuest regularly helps her to understand her fitness levels and improve her focus in her training, ‘I have kept an eye on the scores from the start. Quickly I could see that I was doing too much cardio training and not enough strength, core stability, push ups and balance’. Kelly started using FitQuest independently when it was first installed in the gym as it appealed to her competitive nature and enabled her to actually see how fit she really was. Kelly has found using FitQuest with Dean has encouraged her to push herself, ‘Previously there was no way to measure my fitness and how I was improving, now, with FitQuest, I understand my training so much better. Using FitQuest has taken out the guess work and helped me to focus on specifics like power, endurance and explosive power’.

Dean has found the addition of FitQuest into his catalogue of tools to support Kelly and his other clients has been crucial to enabling him to demonstrate achievements to his clients and supported him in acquiring new clients too. ‘Using FitQuest has been extremely useful as the scores help me to explain what clients should work on and we can track improvements as a result of the targeted training included in my clients’ programmes. Assessing fitness is a key part of keeping clients on track towards achieving their goals’.

Kelly has really felt FitQuest has supported her on her fitness journey, ‘It has helped me realise that I can have 100% confidence in my own ability, along with being pushed by Dean of course. Seeing improvements is a great thing and it certainly motivates me to continue to try to do better’. Crucially FitQuest can also highlight if someone has been overtraining and enables clients to listen to the signs and symptoms their body is telling them, ‘One time I had a cold coming and my scores were lower. FitQuest helped me to understand my body a bit better! I have realised FitQuest will also let me know when I have been overtraining and need to rest a bit more’.

Kelly has made significant progress in her fitness and has achieved the impressive maximum score of 200 for her age and gender, but is still keen to continue to use FitQuest, ‘FitQuest knows my body now and I still have progress to make so FitQuest will be kept busy! Improving my fitness has given me more self-confidence and helped me become stronger, fitter and more focused on my health and fitness. I’d like to inspire other women to be able to do the same and FitQuest has been a big part of my journey’.

Contact us to find out more about how FitQuest can support your members and trainers.

During May 2017, FitQuest is running a competition on social media to win a voucher to purchase lots of sportswear at Selfridges. Visit our social media channels to find out more.

In the meantime, we’d like to draw attention to the Terms and Conditions for the competition, which you can view right here.